Aluminium Bronze – it’s all in the casting! – by Mark Sutton 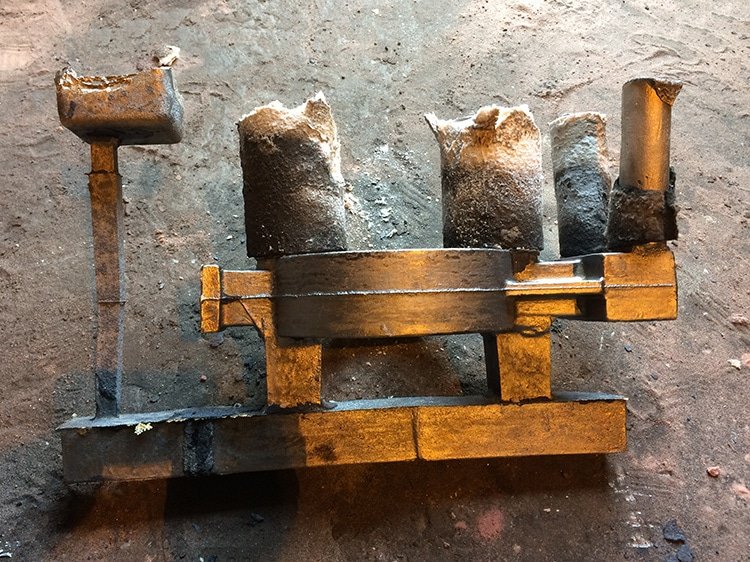 Castings made in Aluminium Bronze are used for marine hardware, pumps, shafts and valve components. They are used for handling gases, seawater, mine waters, non-oxidising acids, and other industrial process fluids. Their resistance to both fatigue and corrosion fatigue is at least as good as that of the copper nickel alloys, some of the aluminium bronzes being, indeed, much superior in these respects. In contact with copper alloys, the electrolytic attack is naturally low. Their resistance to sulphuric acid has led to a successful development in the construction of equipment for pickling steel. Their high heat conductivity and good heat resistance makes them suitable for many other purposes, while they are excellent for castings required to withstand hydraulic pressures.

A great deal of emphasis has been laid on the poor casting qualities of aluminium bronze and it is by no means an easy metal to cast, but a good foundry man who understands the material can make excellent  castings with minimal scrap. The most difficult problem in the founding of aluminium bronze is the prevention of oxide formation on the metal in the mould. Even the slightest turbulence in the metal stream may give rise to trouble.  Again, after the metal has entered the mould, it must lie quietly on or against the mould surfaces as any blowing would be absolutely fatal. It is important to arrange the gates in such a manner that the metal enters the mould at its lowest part and fills it very quietly from the bottom upwards. Any severe change of direction, splashing, turbulence, dropping from a height of more than 10mm, swirling or squirting will cause the formation of dross, possibly resulting in a scrapped casting.

Flow rates should not exceed more than 75mm per second and it is the cross sectional areas of the runners and gates that determine this speed. Temperature and frictional losses also affect the speed at which the metal enters the mould but these are difficult to calculate accurately.

When designing a running system for aluminium bronze some idea of the time taken to fill the mould will be required. The mould needs to be filled in the shortest (but safest) time possible to avoid any cold shuts and miss runs. Basically the running system needs to get the metal in fast enough to avoid any cold shuts or miss runs but slow enough to avoid the formation off dross. By increasing the number of gates a larger volume of metal can enter the mould but still at a safe flow rate.

It is important to realise that with a bottom gated system with a long downsprue the filling time at the start of the pour is higher than that at the end of the pour and it is here when most of the damage to the metal will occur. This damaged metal must be run off into dirt traps at the end of the runner bars and not be allowed to enter into the casting.

Aluminium bronze castings also require careful thought regarding the placement of feeders. Due to their high liquid shrinkage directional solidification is essential. When a mould of varying sectional thicknesses is full and starts to cool, the lighter sections will solidify first and draw liquid metal from the still liquid heavier sections that are attached to them. If these heavier sections are not adequately fed they will shrink. Feeders must be placed against the heaviest sections to supply them with liquid feed metal.  It’s a case of confining the shrinkage problems to the feeders as these will be removed anyway.  In an ideal situation you would gate into the feeders which would be attached to the tops or sides of the heavy sections, thus ensuring that they fill last with the hottest metal.  By the time the metal has reached the furthest parts of the mould it would be cooler and therefore steep temperature gradients would be set up, thus causing progressive solidification back to the feeders. Because aluminium bronze castings must be bottom gated it is very difficult to obtain progressive solidification. The use of chills placed at the bottom of the mould will help set up the steep temperature gradients required  and by a combination of heavy chills and large feeders topped with exothermic compounds a compromise is achieved.  For quality castings the smallest boss of change in section must be considered and either chilled or fed. Where feeders cannot be used the use of chills placed in the mould or cores may aid the foundry man to obtain soundness at these awkward points.

The pictures show a variety of Aluminium Bronze castings made at Sutton Castings along with their NDT test certificates. 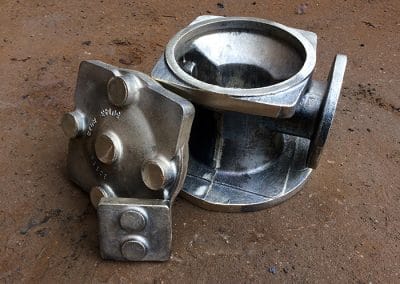 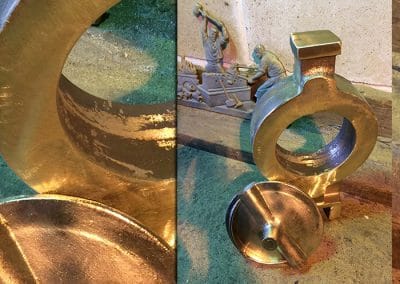